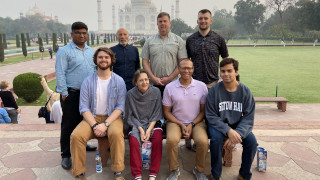 On February 26, 2020, a small group of Seton Hall students, led by Management Professor A.D. Amar, gathered at Newark International Airport in anticipation of the opportunity to experience Doing Business in India. Due to the rise in COVID-19 concerns, the large Boeing 777 had many empty seats, as we began taxiing for our long flight. The lack of passengers meant that we could all stretch out and relax as we flew far north over the Atlantic and several European countries before flying over Afghanistan and Pakistan on our last leg to Mumbai's Chhatrapati Shivaji Maharaj International Airport.

The purpose of the Stillman School of Business, Doing Business in India program, is to allow students to gain an understanding and appreciation of the economic structure, business opportunities, and cultural environments of one of the world's most dynamic countries. This was the twelfth time that Dr. Amar has led the trip and, with the help of our New Delhi based guide, Rohit, the experience exceeded the expectations of the students.

Mumbai, the country's financial capital, is a very large city with a population of over 18 million people. The extremes of wealth are visible in this city that contains one of the most expensive homes in the world as well as some of the poorest communities in the world. Our first stop was the Chhatrapati Shivaji Maharaj Vastu Sangrahalaya museum. The museum was full of paintings, weapons, and other artifacts important to India's history, and it gave us a good first glimpse at this wonderful country. After the museum, we had the opportunity to see India's BSE (Bombay Stock Exchange, Asia's oldest stock exchange dating back to 1877).

Our second day began with a visit to Pharmalab, a manufacturer of equipment in pharmaceutical industry. At Pharmalab, we were greeted by the Director Jay Shah, a graduate of Seton Hall's Stillman School. Senior Sales Manager, Santosh Mulge gave a presentation titled "Why India?" which focused on the positive changes, such as developing industrial corridors and increased ease of importing and exporting goods, that Prime Minister Modi's administration has made to make it easier for companies to do business in India. Our afternoon was spent at the Indian School of Management and Entrepreneurship. After a quick tour of the school, Professor Rajiv Indamath gave us a presentation titled, "There is no such thing as doing business in India" which led to an insightful conversation amongst the students, Dr. Amar, and Professor Indamath. His main point is that business in India is so much more than just major cities, there are also 32 Bharats (states of India) that require attention. The following morning, we boarded a boat and ventured to Elephanta caves, an UNESCO World Heritage Site. The cave temples contain stone sculptures that are predominately dedicated to the Hindu God Shiva. In addition to the intricate history, we saw lots of monkeys and street vendors on the island. Our afternoon included a trip to McDonald's and a flight to our next stop, Varanasi.

Varanasi, one of the oldest inhabited cities in the world, was a highlight for the group. The city and the nearby Ganges river are important to Hindu's. Varanasi is a major pilgrimage site because Hindu's believe that dying in Varanasi and being cremated on the banks of the Ganges river allows individuals to break the cycle of rebirth and attain salvation. At Manikarnika Ghat, we observed the peaceful cremation of a couple of individuals from a boat on the Ganges, while the sun rose in the mist behind us. After a small cruise along the river, we walked through the oldest parts of Varanasi on our way back to our tour bus. We boarded the bus to drive through the campus of Banaras Hindu University, a large university with more than 20,000 students. We spent the afternoon touring the site of a large Buddha statue and another location important to Buddhists, Sarnath. The large mound-like building, Dhamek Stupa, is built on the spot where Buddha was reported to have given his first sermon upon enlightenment. That evening, our group headed down to the Ganges river to watch a wonderful Hindu celebration. From our overlook, we were able to see a wedding down below. The sights and sounds were electrifying, what an incredible experience!

The next day we flew to New Delhi, the political capital of India and spent the afternoon shopping and enjoying the area. The following morning, we traveled to the Jaypee Institute of Technology. We were able to tour the campus before having lunch with some of the Institute's faculty and staff. The meal was an opportunity for our group to openly discuss education and business in India. Before we left, we were fortunate to attend a presentation on the ease of doing business in India. Our next stop was at INOX Corporation, a diverse corporation having operations in renewable energy chemicals and even the movie theater business. At INOX, Bhupesh Juneja discussed how the company has had to adapt to changes in some of the business segments it is involved in. In a very candid conversation, he discussed the company’s successes, as well as a couple of its failures.

The next morning, in Agra, our group woke early to visit the Taj Mahal, one of the seven modern wonders of the world, at sunrise. Due to a report of coronavirus in Agra, we were limited to the outside of the building, but as a group we all felt confident in going to the site. The way the rising sun hits the building, it appears that the inlaid decorations protrude from the building. The symmetry of the building and its surroundings add to its elegance. It is difficult, if not impossible, to describe the beauty of the Taj Mahal, it must be seen in person! After leaving the Taj Mahal, we drove for a couple of hours to Bimtech. At Bimtech, we were given a presentation about the four A's of marketing: adapted, affordable, awareness and accessibility. The last portion of the Bimtech visit focused on the Atal Incubation Center. The Center is a place for entrepreneurs to work with Bimtech advisors to develop and grow their business. It is a great opportunity for the entrepreneurs, but it is also very intense, if the young companies don't meet their marks, they will be eliminated from the program.

Our last day began with a couple of hours at a local shopping mall. The mall was as big as any of us had ever seen. It had all of the stores that a shopper would expect in the United States, as well as all major European and Indian brands. After shopping, we were fortunate to have time to visit the site of Gandhi’s assassination, as well as Raj Ghat, a memorial dedicated to Gandhi, called the Birla House. At Birla House, you can retrace the footsteps that Gandhi took on the evening of his assassination. Other buildings contain information about his life and contributions to India while a small display contains all of Gandhi’s worldly possessions. Our last stop before the airport was Raj Ghat, a site President Trump had visited the week before us. All around the peaceful grounds were trees planted by world leaders that have visited the site in the past.

The only way to really understand the country, the people, the businesses, and the culture of India is through a visit. The sights, sounds, and extraordinary tastes of India can only truly be appreciated through a tangible experience. Our small group walked away with a deeper appreciation for the wonderful people of India. We experienced several religions we had little or no exposure to previously. Doing Business in India was a great opportunity to extend our learning beyond the classroom. The five of us will take our India experience with us as we go out into the workforce, and it will give us each a better sense of our international partners.

For additional information and questions, please contact: Professor A. D. Amar at ad.amar@shu.edu.