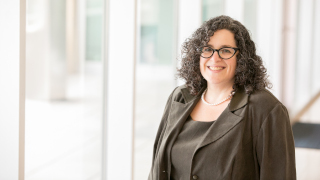 C. Lynn Carr, Ph.D., Professor of Sociology in the Department of Sociology, Anthropology and Social Work in the College of Arts and Sciences, has been awarded a Jack Shand Research Grant from the Society for the Scientific Study of Religion (SSSR). Founded at Harvard University in 1949, SSSR is an interdisciplinary academic association that stimulates, promotes and communicates social scientific research about religious institutions and experiences.

Professor Carr received a $5000 award to support her research on "Shiva in a Jewish Reconstructionist Community." The qualitative sociological study investigates shiva among those affiliated with Reconstructing Judaism (RJ), a small yet well-established American Jewish movement/denomination. "Sitting" shiva is a custom traditionally engaged in by Jews upon the death of an immediate family member. During this time, community members traditionally comfort the bereaved with food and company, and gather together for prayer in mourners' homes.

Through ethnographic participant observation and interviews with RJ community members who have "sat" or attended shiva events, Carr hopes to learn why, when, and how Reconstructionist Jews participate in shiva, how they experience these communal religious spaces, and what the occasion of grieving means for their relationships to Judaism and Jewishness.

"I have chosen the sociologically interesting Reconstructing Judaism movement because it has been largely overlooked by social scientific scholars; its study may yield insights regarding belief, disbelief, and identification within non-Orthodox American Judaism more generally. I focus on shiva because it has been suggested that it is a site of growing importance in non-Orthodox Judaic practice, and because I believe it to be a well-placed window in understanding contemporary Jewish identification – highlighting themes of belief, disbelief, and community," said Carr.

Carr discussed the significance of her current research project:

"First, while religious practice more generally has declined among non-Orthodox Jews–as well as among most other groups in the U.S. — those practices focused on mourning and remembrance of the dead persist. This research project looks to answer why this is the case, asking how shiva is related to individual Jews' conceptions of -- and commitments to -- Jewish community, religion, and identity. Second, the project highlights an understudied movement in contemporary American Judaism. Most scholarly discussion of shiva has looked at Orthodox Judaism. Third, the recent necessity for social distancing due to the novel coronavirus may offer unique opportunities for this research project. Although the research project was not originally begun with this in mind, these extraordinary times may offer a special opportunity for investigating the impact and importance of shiva for Jewish identity and practice as well as the impact of social distancing on religious practice."

Carr's last ethnographic project, involving over a decade of fieldwork, culminated in a book on the Afro-Cuban Lukumi (Santería) religious tradition, A Year in White: Cultural Newcomers to Lukumi and Santería in the United States (Rutgers University Press, 2016). The book explores timely issues concerning religious identification in globalizing, multicultural contemporary U.S., including insider/outsider status, belonging, deviance, ethnic diversification, and faith. Based on the same work, she has also published an article in Sociology of Religion: A Quarterly Review.

According to the grantor's website, "A generous bequest from Jack Shand, a long–term member of SSSR until his death in 2001, has made it possible for SSSR to offer Jack Shand Research Grants to support research in the social scientific study of religion." The association was founded at Harvard University in 1949 as the Committee for the Social Scientific Study of Religion. From 1951 to 1956, it was called the Committee for the Scientific Study of Religion, and, with membership numbering in the hundreds, the change to the present name was made at the end of 1956. SSSR fosters interdisciplinary dialogue and collaboration among more than a thousand scholars from sociology, religious studies, psychology, political science, economics, international studies, gender studies, and many other fields. The Society's flagship publication, the Journal for the Scientific Study of Religion, is the most cited resource in the field.