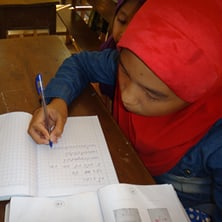 Professor Jorge López Cortina, Department of Languages, Literatures, and Cultures, will discuss the Cham Heritage Extension Program, a literacy project that ran between 2011 and 2017 and saw the first formal attempts to produce literacy materials for the Western Cham language and train instructors as advocates of Cham literacy to the wider community. The event will take place on Monday, March 19, at 6 p.m. in the University Libraries Common Area, second floor.

Initially envisioned as a small literacy project for a few villages, the Cham Heritage Extension Program produced six textbooks and language guides, trained more than 30 Cham teachers, and served over 2,400 students. Most importantly, the program has expanded the scope of use of the written Cham language, producing not only textbooks, but children's books, books of poetry, and a monthly general interest publication, Mukva, the first ever Cham language periodical. The program also established the Cham Language Advisory Committee, a body that watches over all these initiatives in order to ensure that the process of normalization of the Cham language is steered by the Cham community.

The Cham are a Muslim minority in Cambodia, an overwhelmingly Buddhist country. The Cham language belongs to the Austronesian family, which includes Tagalog, Malay and Hawai’ian, and is unrelated to Khmer, the majority language in Cambodia. Cham is the first Austronesian language documented, with texts going as far back as the 4th century CE. In spite of the rich history and literature of the Cham language, Cham literacy has been in decline for centuries, as Vietnam gained influence in the region and finally annexed the remains of the kingdom of Champa in 1832.

This event is sponsored by the College of Arts and Sciences, the University Libraries and the Department of Languages, Literatures and Cultures.

Professor Jorge López Cortina is currently the director of the Spanish Program at Seton Hall University. Besides his involvement in Cham literacy projects, he has authored several textbooks in Spanish and coauthored the Khmer textbook used by the Peace Corps in Cambodia.