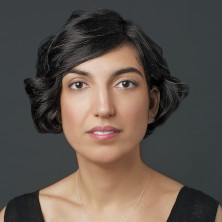 Elif Batuman's first novel, The Idiot, was a finalist for a Pulitzer Prize in fiction. She is also the author of The Possessed: Adventures with Russian Books and the People Who Read Them, which was a finalist for a National Book Critics Circle Award in criticism. She is a staff writer at the New Yorker and has a PhD in comparative literature from Stanford. She lives in New York City.

Herself the daughter of Turkish immigrants and a graduate of Harvard, Batuman is a staff writer at the New Yorker and the author of The Possessed: Adventures With Russian Books and the People Who Read Them (2010). That book was a witty and melancholy tour de force about reading and love and the pleasures of travel as against tourism. That same voice is poured into "The Idiot." It's memorable to witness Selin, via Batuman, absorb the world around her. Each paragraph is a small anthology of well-made observations.

Kirkus calls The Idiot "self-aware, cerebral, and delightful," and The Guardian calls it a "capacious book that creates an alternative world for the reader to inhabit in a manner comparable to the Russian novels that Batuman loves."