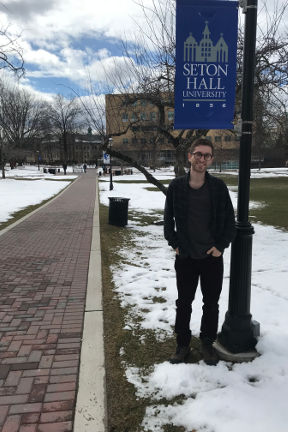 Philosophy major Robert Del Mauro presented his paper "Korematsu v. United States and Legal Realism" at Eastern Michigan University's 8th Annual Undergraduate Conference in Philosophy, held on March 3rd and 4th, 2018. The conference brought together undergraduates from some of the top philosophy programs in the nation to present their work and receive critical commentaries. Robert's paper provides a unique contribution to the legal realism versus formalism debate in philosophy of law. He argues that the Korematsu v. United States case, involving Japanese internment in the United States during World War II, demonstrates the strength of legal realism over formalism. For his scholarly contribution and enthusiasm, Robert received one of the conferences 2018 Spirit of the Conference Awards.

Robert remarks that the conference was one of the "best academic experiences" that he has had in college. He adds, "The professors, graduate students, and presenters were all incredible people and it was really cool to spend a weekend with all of them talking about philosophy and their work. The conference was a lot of fun and it was great to be with so many people passionate about philosophy. Every undergraduate who studies philosophy should go to something like this."

Robert wrote his paper for a class on Philosophy of Law taught by Vicente Medina Ph.D. and notes that "before taking Dr. Medina's class, I did not realize how much I assumed about the nature of law. Throughout the semester, Dr. Medina presented different philosophical theories of law and then used relevant cases to spark discussion and debate about those theories. I was excited to read the Supreme Court opinions that have established some of the most important precedents in American history and then philosophize about the nature of our adversarial system."

For more information about the Philosophy program and how it can provide you with excellent preparation for a variety of professional and graduate school career paths, please contact Abe Zakhem Ph.D., Philosophy Department Chairperson, at abe.zakhem@shu.edu.