New Chapter of Society of Catholic Scientists at Seton Hall Championing the intersection of science and faith, three Seton Hall scientists established a new chapter of the Society of Catholic Scientists (SCS) at the University. SCS is an international scholarly society that "fosters fellowship among Catholic scientists and witnesses to the harmony of faith and reason."

Professor Lopez, an internationally recognized expert in microplasmas, has served as principal investigator on grants from a multitude of organizations including the National Science Foundation (NSF) and the Air Force Office of Scientific Research. He is the founder and director of the Laboratory for Electrophysics and Atmospheric Plasmas (LEAP) at Seton Hall. Some of his discoveries and ideas have led to cutting-edge technologies and applications. 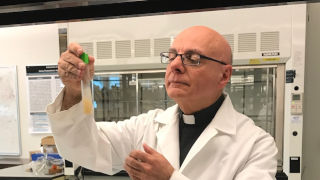 Father Buonopane has held several positions in academia, the federal government (USFDA) and food and pharmaceutical companies for his food chemistry expertise. His research has led to a deeper understanding of the deterioration of food lipids, the role of essential oils as natural antioxidants and, in collaboration with Professor Lopez, the effect of cold plasma treatment of botanicals. Father Buonopane is the recipient of a University Research Council Grant for his work with cold plasmas and sweet basil.

Father Laracy is an inaugural fellow of the International Institute of Informatics and Systemics (IIIS). His scholarship has focused on fundamental theology, cybernetics, dynamical systems and computer and systems engineering (especially for safety and security). While a graduate student at MIT, Laracy’s research at the Complex Systems Research Laboratory was supported by grants from the NASA Ames Research Center and the National Science Foundation. As a systematic theologian, a significant part of Father Laracy's research and teaching is focused on placing the Catholic intellectual tradition, especially theology, in dialogue with the sciences. 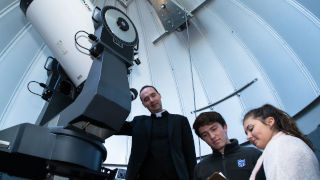 All three faculty members have worked on collaborative research topics that range from understanding the effect of plasma treatment on botanicals to developing an interdisciplinary course on the science and theology of food. They established the chapter with the hope to continue the work of Seton Hall’s Distinguished University Professor of Physics and world-renowned theologian, Father Stanley Jaki, who was recently named one of five Catholic scientists that "Shaped our Understanding of the World" (the other four being Canon Nicolaus Copernicus, Father Gregor Mendel, Father Giuseppe Mercalli and Monsignor Georges Lemaître, who were respectively responsible for our understanding that the sun is at the center of the solar system, the experiments with pea plants that led to the discovery of hereditary trait patterns—the foundation of modern genetics, a seismological scale that accounts for human impact, and the development of the Big Bang Theory).

Father Jaki dedicated his career to exploring the intersection between faith and science and was awarded the prestigious Templeton Prize for "his immense contribution to bridging the gap between science and religion, and his making room, in the midst of the most advanced modern science, for deep and genuine faith."

"A lot of what I envision us doing at the local level is building on his legacy of promoting a beneficial interaction between the Catholic faith and natural science," said Father Joseph Laracy, president of the chapter. "Fortunately, Seton Hall is a Catholic university and we have great scientists, so it's really a perfect place for Catholic scientists to be who they are and support and encourage each other."

The local chapter will organize public lectures in-person or through Zoom, establish science-faith reading groups, and provide spiritual-support opportunities for Catholic scientists. Members can relate their faith and professional work with like-minded people and raise awareness about the isolation that Catholic scientists sometimes experience.

"We are living in a world that tacitly believes that faith and reason are diametrically opposed to one another," said Cristina Ventura, a doctoral student in the Department of Chemistry and Biochemistry and a current SCS member. "The Catholic scientist is a living testament to the falsity of this claim. I was thrilled when I discovered the SCS because its very existence demonstrates the unity of the Catholic faith and the pursuit of science."

In its first four years, the SCS grew to 1,250 members in 50 countries. The organization is also in the process of forming 17 collegiate chapters in the United States and Canada – with plans to extend to Poland and Spain. Participants can sign up for updates on publications and events, access SCS conferences and connect with other chapter members through a moderated, online discussion forum.

"In his Apostolic Exhortation, Evangelii Gaudium, Pope Francis offers a timely reminder to the universal Church on the importance of relating the Christian faith and the natural sciences," noted Father Laracy.

Dialogue between science and faith also belongs to the work of evangelization at the service of peace. Whereas positivism and scientism ‘refuse to admit the validity of forms of knowledge other than those of the positive sciences,’ the Church proposes another path, which calls for a synthesis between the responsible use of methods proper to the empirical sciences and other areas of knowledge such as philosophy, theology, as well as faith itself, which elevates us to the mystery transcending nature and human intelligence. (Francis, Evangelii Gaudium, 2013, 242.)

For more information or to join the Seton Hall chapter of the Society for Catholic Scientists, please contact Father Joseph R. Laracy at joseph.laracy@shu.edu.