On November 14th, the Criminal Justice Student Association (CJSA) held its first speaker event of the academic year. The Honorable Patricia K. Costello '74 gave a lecture on "The Role of a Chief Judge: Managing Crises and Improving the System." Judge Costello, who retired in 2015, discussed a range of issues spanning her 25-year career within the Judiciary as a superior court judge, including the last decade as the Assignment Judge in Essex County.

More than 100 students were in attendance to hear Judge Costello speak about the interactions between judges, administrators, defendants, victims, and the press, among other stakeholders in the justice system. 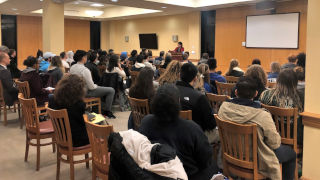 Judge Costello also spoke about the importance of the Sheriff's Office and its impact on the operations of a courthouse. The judge's address showed these daily interactions to be considerably more complex than one would tend to believe. She noted that among other obligations, the Sheriff's Office is principally responsible for overseeing the security of the courthouse – which in and of itself is a complex operation. As such, the Sheriff's Office is often compelled to balance the protection of the courts with maintaining a positive image within the community – a critical aspect of their job because the Sheriff is an elected official. These dual and sometimes competing goals can be challenging for sheriffs, said Judge Costello, and they must make the difficult choices in where and how to allocate limited resources.

Not unlike the Sheriff's Office, the Judge noted that the press also serves a pivotal role in the community that can present challenges in the day-to-day management of a courthouse. These issues, said Judge Costello, can be likewise be unnoticed by those who are not intimately involved in the day-to-day management of a courthouse. Aside from the core function and connection the press has within the courts, the judge discussed specific instances when in the course of doing their job, members of the media can expose jurors and victims with undue risk by breaching the court's policy and procedure.

The lecture, one of many the CJSA has planned, was well received by students and faculty alike in attendance who "appreciated the opportunity to hear the first-hand experiences of a former Assignment Judge." One criminal justice student noted that the Judge's insights "gave her a different perspective on the justice system." With a great deal positive feedback from students at the event, Faculty conveyed their appreciation on behalf of the College of Arts and Sciences and the CJSA to Judge Costello for her "thought-provoking and insightful lecture."