History Professor Featured on NPR on Columbus, Statues and the Italian-American Experience 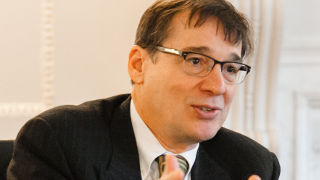 Professor William Connell is the holder of the Joseph M. and Geraldine C. La Motta Chair in the history department at Seton Hall. In addition to being the translator for what has become "the standard version" of Niccolò Machiavelli's classic book, The Prince, assigned in History, Political Science and Leadership classes at universities around the country, he is a noted expert on the Italian-American experience.

As noted in this interview by National Public Radio's WNYC, the experience of Italian-Americans in the United States is both complex, and inextricably woven into the cultural icon that is Christopher Columbus— and the statues that celebrate both he and the rise of Italian-Americans as an ethnic and societal force in America.

Currently, a statue of Christopher Columbus that has graced Columbus Circle in New York since 1892 is "under review." The article that functions as a synopsis of the interview notes that:

This month, the Mayoral Advisory Commission on City Art, Monuments, and Markers will make its recommendation: should the Columbus monument in Columbus Circle stay? Or it should come down?

The commission is evaluating all public art on city-owned land, but the Columbus monument is one of a handful that has sparked controversy; some are calling for these statues to be removed.

In the radio feature, Professor Connell tells how although Italians did not come to this country venerating Columbus, they found here an American public that did. So, in the face of widespread and even murderous discrimination, Italian-Americans seeking to "belong" in the United States adapted to the sense of the heroic they found surrounding the Italian-born Columbus and embraced him as their own—adopting him as a their claim, in a sense, to their share of American history— as well as a rallying point of pride.

Speaking of the racial hatred Italian immigrants faced in this country, the interviewer notes the fate of 11 Sicilian men who had been acquitted of murder in New Orleans in 1891, a year before the Columbus statue in New York City was erected. They were all lynched—one of the largest mass lynchings in American history. Upon hearing the news, we are told that "some New Yorkers celebrated. For example, a young, future president."

"The young Teddy Roosevelt wrote a letter to his sister saying he had heard about this and he thought that “those Dagos got what they deserved."

Connell also says that "Italian-Americans knew they had to do something to change the situation. They decided on a statue. And they picked Columbus because not only was he an Italian, but because he had become an American icon."

The statue, we are told, was about Italian-American "legitimacy."

Professor Connell sums up the Italian-American response and the quest for legitimacy embodied in the statue of Christopher Columbus:

"Even though we have darker skin, we speak this strange language, we dress differently, our food is different— yet, we have something in common with this man you consider already to be a great hero."

You can hear the full feature on NPR/WNYC Radio,"The Complicated History of the Christopher Columbus Statue."