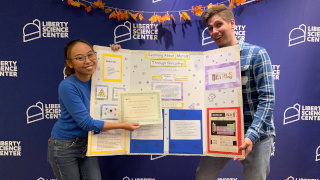 Celebrating National Chemistry Week, juniors Anne Francine Pino and Andrew D'Amato represented the SHU American Chemical Society (ACS) Chemistry Club at the Liberty Science Center ChemExpo on October 19, 2019. This year's theme was "Marvelous Metals" and the majority of New Jersey colleges and universities turned out to compete to create the most engaging, interactive, and interesting STEM presentation tailored specifically for NJ's K-12 population. Seton Hall rose above universities such as Princeton, NJIT, and Stevens to take first place, shining above the competition.

Representing team Seton Hall, Anne (English B.A., Chemistry minor) and Andrew (Criminal Justice B.A., Chemistry minor) set out to educate young children on the science behind circuitry and metals. They used Play-Doh and potatoes as conductors, explaining to the visiting children and their parents, that the alkali metals found in both, specifically the sodium, allow them to be great conductors of electricity. Getting down to the children's level and explaining in a fun and interactive way, they had the children make two Play-Doh balls, connected them to a battery pack, and passed electricity through them to illuminate LED lights, produce sounds, and power small motorized devices. Our Seton Hall Chem Club's vibrant display set them apart from all other universities. One of the most fascinating parts of their activity was the use of potatoes as conductors. Children, parents, and judges were amazed to see the LED lights turn on when electricity was allowed to flow through the potatoes. Utilizing ordinary materials and presenting them in a comprehendible way, all while catering to young minds set Seton Hall apart from the rest! Their demonstration activity was completely kid-friendly, children were able to form the conductive Play-Doh balls, connect them, and light up the experiment themselves.

Principle Judge Miriam Gulotta said: "After the event, we got a very nice email from the family of a 6-year-old and they specifically mentioned how much they learned and enjoyed the event and especially the Play-Doh circuits! For us, it does not get better than those emails!" 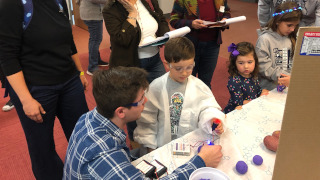 Andrew D’Amato (bottom left) teaching a young chemist whilst the judges look on.

"Through the American Chemical Society, we are able to teach that chemistry can be fun and interesting!" says Anne. "What set us apart that day was not how much we knew about metals, but rather our ability to get down to kid's levels and teach them while keeping it fun and engaging."

"Judges were heavily impressed by the presentation, constantly noting how interactive they were. One judge even said that they learned something new themselves!" Andrew said, "After explaining the activity to the kids, parents were constantly coming up to me and telling me how great I was at simply explaining such a complex topic. But for me, it was really about being in the mindset of a kid and focusing on the fun aspect just as much as the chemistry behind it." 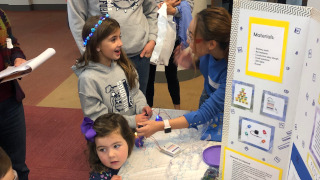 The event ran all day from 10:00 a.m. to 3:00 p.m. and Seton Hall Chemistry Professor Joseph Badillo said, "Anne and Andrew's ability to teach and truly engage the children, having them repeat keywords like 'conductor' and asking them interactive questions to gauge their interest was remarkable. The smiles on the kids' faces said it all! The recognition is well deserved!"

Anne and Andrew, along with Seton Hall ACS, plan on competing every year to keep the tradition alive and promote their love for chemistry. After graduation, Anne is planning to attend medical school, while Andrew would like to use his minor in chemistry working for the DEA. Together they showed that creativity, personability, and passion for chemistry pays off as first place came with a generous cash prize and bragging rights among the top colleges of NJ.