5 Questions with a Virologist on COVID-19 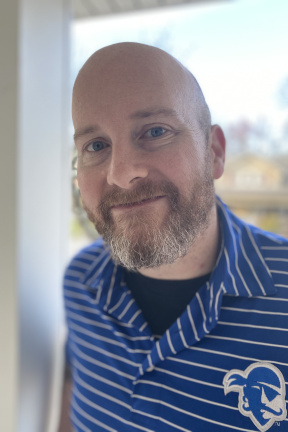 As the COVID-19 pandemic continues to progress in the United States and worldwide, many are trying to better understand what the virus is and how it affects humans. D. Brian Nichols, assistant professor in the Department of Biological Sciences at Seton Hall University, has conducted extensive research on virus-host interactions and, specifically, how viruses affect the immune responses of their hosts. He recently addressed these topics as they pertain to COVID-19.

1. COVID-19 is referred to as a "novel virus." Can you tell us what that means and what impact it has on the effect of the disease on human beings and a potential vaccine?
"Novel" in this context means that it recently emerged to affect humans. It is strongly believed that bats are the source of the current infectious agent with an unknown animal likely serving as an intermediate host. Bats harbor a wide variety of coronaviruses related to the original SARS-CoV. As the human population comes more and more in contact with these animals, risk of exposure and the risk of viruses that can infect humans goes up significantly. Coronaviruses are RNA viruses, which means RNA is the genetic material. Unlike cellular organisms that use DNA as the genetic material, RNA viruses replicate without significant proofreading of their genetic material. What that means is that these viruses — which reproduce themselves over and over again — make a lot of mistakes when the genetic material is copied. Most of these mistakes lead to inactive viruses that lose the ability to infect cells, but some mistakes result in viruses that are capable of infecting new hosts. This event likely led to the emergence of the novel coronavirus, officially designated as SARS-CoV 2, the causative agent of Covid-19. The most likely scenario at present is that humans came in contact with animals in Chinese wet markets. The large number of people in contact with exotic live animals there, combined with butchering these animals in that wet market, created what could be seen as the perfect environment where the new SARS-CoV 2 could emerge to infect humans.

Being a new virus that has never circulated in humans before means that vaccine research essentially started when the virus was identified in December 2019. Simply put, until it was identified, there was no virus to design a vaccine against. Normally, vaccines take years to be developed and go through human trials. The fact that we have a vaccine in trials is really amazing and a tribute to the hard work of the researchers who have been studying this virus. As my colleague Dr. Constantine Bitsaktsis, who studies vaccine development, has pointed out, the speed and approval for clinical trials of Covid-19 vaccines is truly unprecedented. However, evaluating the vaccine will take time. Also, the original SARS-CoV emerged in 2003, and generating a vaccine to that virus has proven to be challenging.

2. You specialize in understanding and characterizing virus-host interactions and viral antagonism of host immune responses. What can you tell us about the virus-host interactions of COVID-19?
Typically, when viruses infect a cell, the cell activates its innate immune response to attempt to eradicate viruses. The human body essentially marshals its resources to fight against what is, in essence, the invasion of a foreign entity. These responses include inflammation, inducing cell death to destroy both the cell and the virus, and activating antiviral proteins such as interferon. It can, in some ways, be considered a "shotgun" approach, with the initial immune response scattering its shot and killing everything in the vicinity of the threat. All these efforts are in place to try and contain the infection. Eventually, in what can be thought of as "the next wave" of defense, the adaptive immune response is activated to destroy any viruses that were not killed in the initial response. The adaptive response includes B cells producing antibodies to target and neutralize remaining viruses in the body. For viruses, the most important part of the adaptive immune response or "next wave" is the activity of cells called cytotoxic T-cells. These cells are the hunters/killers of the immune response and take more of a "rifle" approach, actively hunting down cells infected with viruses and eradicating those particular cells, thereby containing the virus. In addition, the adaptive response creates memory immune cells, which remain after the body clears the virus and can activate the immune response much faster on a second exposure. These memory immune cells are the basis of vaccines and why it is so important to be immunized against infectious agents.

Viruses, however, are not in the habit of going quietly. Viruses have evolved complex strategies to prevent the body's immune response from activating. In the case of the original SARS-CoV, we know that it blocks the activation of several key immune pathways. By modulating the host's immune response, SARS-CoV was able to ensure a successful infection by escaping the body's defenses.

It's also important to note that things can go wrong on the defense as well. Sometimes the immune system overresponds to infection. I always tell my students to think of the immune system working best in the so-called Goldilocks zone. Too little of an immune response and the virus is not cleared. Too much and the body's own immune response damages the body trying to clear the virus.

3. What can you tell us about host immune responses in humans to COVID-19?
There's a lot we don't know at the moment. It's likely that in some individuals, the immune response is not strong enough to kill the virus, and as the virus replicates it destroys the lungs, leading to severe complications and possibly even death. In others, it seems to be that the virus induces a cytokine storm. Cytokines are produced by immune cells to communicate and coordinate responses to infectious agents. In these patients, too much cytokines results in an immune response that damages the patient's own body, leading to severe complications. This scenario may be responsible for a number of the severe cases and even mortality among those who seem to otherwise healthy. To use the Goldilocks analogy, this would be a case of the porridge being too hot. The cytokine storm is not unique to SARS-CoV 2. This event has been noted in other great pandemics including the 1918 Spanish Flu, Avian Influenza, and the original SARS-CoV. The reasons why some individuals have an over-active immune response against severe human coronaviruses such as SARS-CoV, MERS-CoV, and SARS-CoV 2 is still poorly understood. What is known is that when this event is triggered, the body's own innate immune responses in the shotgun approach to eradicate the virus trigger acute lung injury which can in some cases be fatal. In a patient dealing with chronic diseases, this event may be too much to overcome and may at least partially explain why individuals with certain pre-existing conditions have higher mortality ratios.

4. Removing for a moment age and underlying health conditions, why is the virus affecting different people so differently?
There's a variety of factors likely at play, many of which are still in the process of coming to light through scientific enquiry and testing. I think it is worth mentioning that most cases of Covid-19 are very mild. I am also mindful that mild means many things to different people. In mild cases it can range from signs and symptoms akin to a severe flu, to signs and symptoms similar to that of the common cold. Many patients also report mild pneumoniae, which is still significant, but does not require hospitalization. In addition, people may become infected and never even know they have it. Many people infected with SARS-CoV 2 are completely asymptomatic and would never know they had it in the absence of a test. Fortunately, children seem to be the latter, though there have been some exceptions usually involving pre-existing conditions. On that note, it is known that age is a factor, which can be reproduced using mice in the lab. The older the patient gets, the more likely the risk of severe complications, with patients over 60 experiencing the most significant complications with the disease.

For chloroquine, it has been reported that this drug blocks the original SARS-CoV as well as several other human coronaviruses from infecting cells. Essentially, it acts as a doorman and denies the virus entry to the area of the cell that the virus needs to complete its replication cycle. There have been some encouraging reports about chloroquine's use as a therapeutic to treat SARS-CoV 2 infections, but again, it's too early to definitely say that its use will be effective in controlling the current pandemic. There have also been reports of chloroquine toxicity in patients, so it is very clear that even if effective, chloroquine will not be a "one drug treats all" for every case of Covid-19.

D. Brian Nichols, Ph.D.:
D. Brian Nichols, Ph.D. is an assistant professor in the Department of Biological Sciences at Seton Hall University. He received his bachelor's degree in microbiology from Southern Illinois University. He went on to receive his Ph.D. in microbiology at the University of Illinois under the supervision of Professor Joanna Shisler. The focus of his Ph.D. work was virus-host interactions, through which he identified the function of a novel poxvirus protein that inhibits host immune responses. From Illinois, he went on to do his postdoctoral research at Loyola University of Chicago Stritch School of Medicine in Professor Susan Baker's lab. There, Professor Nichols was part of a team that focused on identifying and characterizing inhibitors of the original SARS-CoV. Following his time at Loyola University, Professor Nichols worked as a postdoctoral researcher in Professor Neerja Kaushik-Basu's lab at the University of Medicine and Dentistry in New Jersey, where he worked on characterizing Hepatitis C Virus host interactions. He also worked as part of a team to characterize mechanisms through which Hepatitis C Virus remodels host cells into an environment conducive for virus replication.

In 2013, Professor Nichols accepted a position at Seton Hall University in the Biological Science Department. At Seton Hall, Professor Nichols continued his research on the human poxvirus Molluscum Contagiosum. Highlights of his research include identifying the function of a novel MCV protein capable of inhibiting several key host immune responses. He is also interested in characterizing SARS-CoV 2 host interactions in the wake of the current pandemic. Professor Nichols teaches several courses for pre-health profession majors and graduate students, including Biochemistry of Metabolism, Molecular Biology, Molecular Virology, and Introduction to Microbiology.