The Reverend Peter Pettit, Ph.D., founding chair of the Council of Centers on Jewish-Christian Relations, will deliver the Twenty-Fourth Annual Monsignor John. M. Oesterreicher Memorial Lecture on "Semper Reformanda at 500: Old and New Questions for Christians and Jews," on Thursday, October 26, at 7:30 p.m. in the Caroline D. Schwartz College of Nursing Amphitheatre, at Seton Hall University. The program is hosted by the Institute of Judaeo-Christian Studies.

This year marks 500 years since Martin Luther's presentation of the 95 Theses on Indulgences, launching the Reformation. One hallmark of the Reformation is its relationship to the Jewish religion and community, including Luther's anti-Jewish posture, assessed especially in terms of events in Europe and North American of the past 70 years. Rev. Pettit will look at the conviction that the Church is always reforming, Ecclesia semper reformada, what challenges remain and what this century calls the Church to examine in its life and faith in relation to the Jewish people.

"In 2017, as Lutherans and Catholics commemorate the 500th anniversary of the Reformation still divided, they can also celebrate the great strides already taken to restore unity between them. They can celebrate together the ecumenical movement for unity, to which Lutherans and Catholics both contribute. They can celebrate the historic achievement of the Joint Declaration on the Doctrine of Justification, and common perspectives already reached on many other matters of faith, their ability to undertake common witness to the gospel. They can and must also look forward to the day when, in obedience to the will of Christ (John 17:21), they will be able to celebrate together their unity as disciples of the one Shepherd, Jesus Christ," writes Monsignor John A. Radano of Seton Hall University in his foreword, "The Hope for Unity," in Reformation Observances: 1517-2017.

An ordained Luther pastor, Reverend Pettit is associate professor of religion studies and director of the Institute for Jewish-Christian Understanding at Muhlenberg College in Allentown, PA. The founding chair of the Council of Centers on Jewish-Christian Relations, he has long been involved in Christian-Jewish dialogue and an active leader in national and international organizations. A Shalom Hartman Institute (Jerusalem) Fellow, he co-directs the annual Interreligious Theology Conference and Interfaith Partners for Peace, and has co-directed the educational project, New Paths: Christians Engaging Israel. He has held research fellowships at the Hebrew University, American Jewish University, the Oxford Centre for Hebrew and Jewish Studies, and Hebrew College. He has contributed entries to the Dictionary of Jewish-Christian Relations and the Encyclopedia of the Bible and Its Reception, as well as chapters in Seeing Judaism Anew, Covenantal Conversations, and Religious Stereotyping and Interreligious Relations. 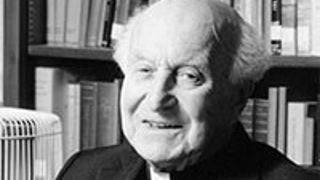 The annual memorial lecture at Seton Hall celebrates the strengthening of Catholic-Jewish relations and remembers Monsignor Oesterreicher's commitment to the fostering of interreligious dialogue through his work on Vatican Council II's statement of goodwill in Nostra Aetate, the "Declaration on the Relation of the Church with Non-Christian Religions."

Father Lawrence E. Frizzell, Director of the Institute of Judaeo-Christian Studies and the organizer of this year's Oesterreicher Memorial Lecture, welcomes members of the community to join in reflections on Nostra Aetate, the work of Monsignor Oesterreicher and Semper Reformanda. The event is free and open to the public, however, registration is encouraged by contacting Lawrence.Frizzell@shu.edu  or calling (973) 761-9751. The event is sponsored by the Monsignor J. M. Oesterreicher Endowment.